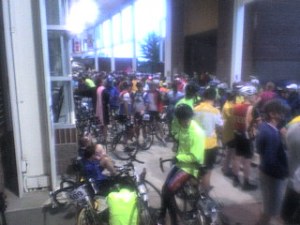 All dressed up and no place to go. Here are a small portion of the 2400 cyclists who descended on Chattanooga, TN to do the 3 State 3 Mountain Challenge hiding under the bleachers at Carter-Findley Stadium. The ride, scheduled to begin at 8 am was delayed 45 minutes because of a thunderstorm which rolled through at 7:30 — an awesome, thunder-clappin, gullywasher. I’m talking “pluitin” rain.

When Red lined up, he actually didn’t know itwas starting. Did he see Rich Hincapie? Did he tell you there were 2400 cyclists, starting in the rain? Not likely. Any rate, the peleton kept rolling forward in order to settle into a place for the start, but before they knew it they were rolling and just kept on rolling — 8-12 mph of rolling — for 3 miles. Crazy. Did you know that there were 2400 cyclists?

Big Red followed in the rain and by the time he crossed the Tennessee River the frst time, he was soaked. The route climbed up past Signal Mountain and headed for Suck Creek Mountain which marked the first of the states and the first mountain (5 miles at 4-6%). Not a bad climb, though it was l-o-n-g. Red said it wasn’t bad because he was able to keep his cadence up and manage his heart rate better. By that he means he was able to ‘push’ it without starting a lactic- acid-muscle-meltdown. Though Red was passed — as usual — on the climbs, he did manage to pass a number of others which made the world’s fatest climber happy. But what the heck was that chirping sound, brp, brp, brp…. Wheel wobble. Broken spoke! Blast! The wheel didn’t look to bad, so Red pressed forward.

The descent off of Suck Creek — aptly named — was a little er, sucky. Nervous riders, newbie riders, careful riders, inexperienced riders made for a little sketchiness — oh and the wind and the water, and 2400 cyclists made for less than bombing conditions. Finally, at the bottom, groups begain to form up and catch the rhythm of group riding. Red was surprised by how easy a pace many of the cyclists took. This led Red to conclude that this century is more of a ‘tour’ than an all-out-on-the-rivet-quad-cruncher which was just fine — it was May 3 for cryin’ out loud. 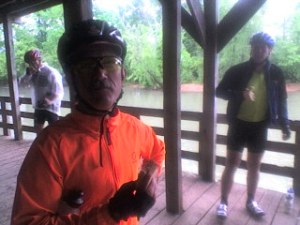 So, gruppettos settled in and made for the first SAG stop at Ketner’s Mill. There must have been 700 cyclists at the first stop. Relief from the chill of being wet and descending came from the surprising yet welcome venue of 700 cyclists grouped in front of the feed table. Ah, PBJ never tasted soo good.

Speaking of PBJs, Dr. Pete and Big Red did the ride together. In this picture you see Dr. Pete eating his PBnJ. What you don’t see is that he is shivering so much his hand is shaking. Dr. Pete climbed under a fireman’s coat to warm up and Red couldn’t find him in the mass. Where’s Pete?

Heading out sans Dr. Haibikingrockincycler, Red pressed forward feeling better on a ride than he has in recent memory. From SAG 1 to SAG 2there wasn’t much climbing worry. The rain had stopped, and though the roads were still pretty wet, there was a sense that this could get better than it had started. Though there wasn’t much daunting climbing or head wind, the scenery was amazing. It was

beautiful.
After about 2.5 hours Red arrived at the second SAG. Again, hundreds of cyclists. And one stop shopping…. I love the South. At the 2nd SAG Dr Pete and Red reconnected and wrung the water out of their socks — a lot of water. Nice. And sensing an opportunity, because of the conditions, the potentially late finish, get back to the house, blah, blah, blah, they decided to shorten the ride and take the 62 mile route back.

The route past Nickajack Lake and back over the Tennessee River. Did Red say the scenery was beautiful? Most scenic ride in the SE he’d say. Crossing the Tennessee again Red and Pete headed East along TN 134 into GA. After about 8 miles which was a climb and descent of sorts. Red and Pete came to foot of Lookout Mountain.
To be continued…