At Grace Presbyterian we are in the midst of a series this spring called, “Walking with Jesus” in which we are following Christ to Jerusalem and beyond. Tomorrow’s passage is from Luke 5:27-39 for which I have previously written sonnets and which I include below.

The painting is by Jacob van Oost (I) (1603–1671). The Calling of Matthew is cast in a contemporary Flemish setting for Oost, and it’s amazing. What do you see as you scan the characters which van Oost has captured? 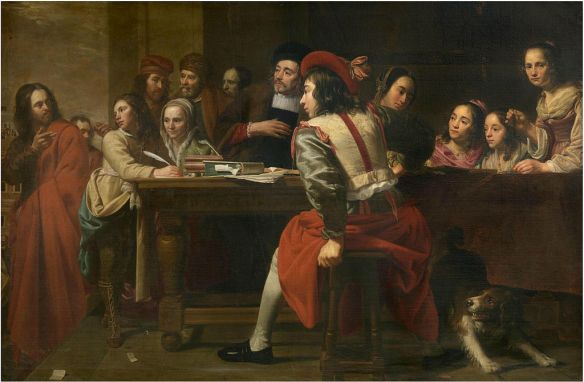 Here’s what I see. Front and center is a soldier with his back towards us who seems to be moving to stand. As he looks at Christ is he moving to confront? Jesus, is to the far left and almost out of the frame. He seems to not be confronting or eliciting any sort of threatening posture which would warrant to the soldier’s reaction. In fact, Jesus seems merely to be walking past and away from Levi. Nevertheless, he beckons Levi to follow. Levi is harder to see. He is seated behind at his table, surrounded by his business, assistants, and those from whom he is collecting. He has his hand to his body as if to say, “Who, me?” And then there is that arresting woman on the far right. Staring at you and me. She holds in her hand the money changer’s scale and seems to be asking, “And what about you?”

These sonnets are for Christ’s church. If they are helpful, please feel free to copy or reprint in church bulletins, read aloud, or repost. I only ask that an attribution be cited to myself (Randall Edwards) and this blog (backwardmutters.com). Thanks

After this he went out and saw a tax collector named Levi, sitting at the tax booth. And he said to him, “Follow me.” 28 And leaving everything, he rose and followed him. 29 And Levi made him a great feast in his house, and there was a large company of tax collectors and others reclining at table with them.  30 And the Pharisees and their scribes grumbled at his disciples, saying, “Why do you eat and drink with tax collectors and sinners?”  31 And Jesus answered them, “Those who are well have no need of a physician, but those who are sick.

You may listen to me read the sonnet here.

He stopped at my table, stood and stared
At me and the extorted wealth I’d taken;
He discerned in me how poor and scared
That my collector’s kingdom would fin’lly be shaken.
He called, “Follow me.”  I arose and followed after,
Abandoned booth and scales, cast them each aside,
And welcomed to my home light and love and laughter;
No longer marking other’s debts in the ledger of my pride.
And reclining with this rabbi, at the table of the least
While my betters stood despising, scoffing from outside,
My Master in the presence of mine enemies set a feast
Of lordly leisure and this promise: to never leave my side.
My mission now is to carry news, calling from east and west,
“Come to the table of this King, be found, be filled and rest.”

The second sonnet, Blessing has Burst, is based upon Matthew 9:14-17 which is paralleled in Luke 4:33-39. The passage in Matthew reads,

Then the disciples of John came to him, saying, “Why do we and the Pharisees fast, but your disciples do not fast?” And Jesus said to them, “Can the wedding guests mourn as long as the bridegroom is with them? The days will come when the bridegroom is taken away from them, and then they will fast. 16 No one puts a piece of unshrunk cloth on an old garment, for the patch tears away from the garment, and a worse tear is made. 17 Neither is new wine put into old wineskins. If it is, the skins burst and the wine is spilled and the skins are destroyed. But new wine is put into fresh wineskins, and so both are preserved.”

You may listen to me read the sonnet here.

They pour a pitiful whine about His disciples not fasting–
A bitter tasting brew of mercies grown stale and old,
Like an unprepared patch which makes worse the fast’ning,
Pulling brittle devotion from a heart that’s grown cold.
“There can be no sorrow” he said, “while the bridegroom tarries
No grieving or renting one’s garments in shame
For the joy of His presence lifts their hearts and carries
Them forward in celebration to the praise of his name.”
But one day they did mourn as the Groom was led away
To pour out his life into a stone wineskin’s shell.
Stopped up and sealed fast in silence for three days
Till Mary brought the news which no guest tires to tell,
“Rejoice for the New Wine the Groom’s resurrection pours
The Bridegroom’s bubbled blessing has burst open death’s door!”

2 thoughts on “Of Tax Collectors and Whiners”