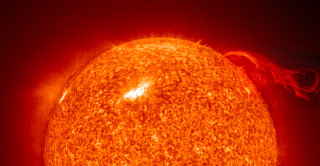 Over at the Big Picture, you can find a collection of great NASA photos of the Sun.

The Sun is the fourth of the planetary spheres and whose qualities are imagined in C.S. Lewis’ The Voyage of the “Dawn Treader” which will be released as a movie in December 2010. I’ve been leading a discussion group on the Dawn Treader, and have been having a hard go at helping the group catch on to identifying Lewis’ exposition of the verses. Lewis might have called the work we are doing as ‘looking along the beam’ –that is to say, Lewis doesn’t merely want to tell you about the virtues, he wants you to experience them.

In order to help the group grasp the reality that they already knew the poetic virtues of the Sun even though they could not articulate them out-right, I asked them to come up with a list of songs about the Sun. I posted the request on facebook and received a lot of great replies. Here they are for you enjoyment and comment: Walking on Sunshine (Katrina and the Waves), Might as Well Be Walking on the Sun, You Are My Sunshine, Sunshine Go Away Today, Here Comes the Sun (Beatles), Find Your Place in the Sun, I Wanna Go to the Sun (Frampton), Soak up the Sun (Sheryl Crow), Sunshine on My Shoulders (John Denver), Black Hole Sun (Soundgarden), Sunshine Day (The Brady Bunch), Sunshine Superman (Donnovan), Blinded by the Light (Manfred Mann’s Earthband), This Little Light of Mine, Sun King (Beatles), Red Rubber Ball, I Can See Clearly Now, Don’t Let the Sun Go Down on Me (Elton John), You Are the Sunshine of My Life, Sunshine of My Love, All the World is Mad (Thrice), Who Love the Sun (Velvet Underground), Good Day Sunshine (Beatles), Wheel in the Sky (Journey), The Heart of the Sun, House of the Rising Sun (Folk Traditional), I’ll Follow the Sun (Beatles), That Lucky Old Sun (Louis Armstrong), Softly as in a Morning Sunrise (John Coltrane), Staring at the Sun (U2), Heart of the Sunrise (Yes), Wonderin Where the Lions Are (Bruce Cockburn), Island in the Sun (Weezer), Sunny (Bobby Hebb), Good Morning Starshine (Oliver), and Sun (Patty Griffin).

What others would you suggest?