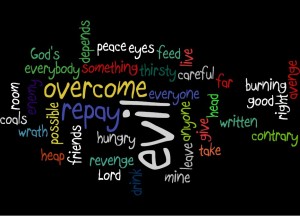 We make the turn from the excessive loves (greed, gluttony, and lust) and the defective love (sloth) into the final three of the Deadly Sins which are what Dorothy Sayers refers to as Love Perverted.

The Perverted Loves are loves which though mirrored in some of the others becomes so twisted that they cease to be merely disordered loves by degree and instead become a willful hatred of my neighbor. For Sayers (and Dante), Wrath is the first of these Perverted Loves.

“Wrath” is not merely “anger”. Indeed, anger, in its proper place and proportion, is the appropriate emotional response to a threat of something good. It is good for us to be angry at injustice and sin. In their book The Cry of the Soul, Dan Allendar and Tremper Longman write about how anger becomes twisted,

Sayers says that “anger becomes wrath when a perceived slight or personal injury wells up in an excessive love of justice perverted to revenge and spite” (Sayers commenting on Dante’s Purgatory).

Of those examples which Dante employs in Purgatory is that of Haman in the book of Esther. Haman. As you recall, Haman did not believe Mordecai to have shown him proper respect. Rather than deal with Mordecai, Haman worked to see Persia “cleansed” of the entire Jewish population. Wrath, as you can see, is a love of justice which inevitably blinds its victim (agent). The benefit for the person given over to wrath is that they do not, in fact, know what they are doing. It is the self-delusion of wrath which makes it so tempting. I can be incredibly wicked, AND I am also the victim of my own emotional rage.

It is easy for us to understand wrath as anger, but both Dante and Sayers recognize that there is another side. Sayers goes on in her commentary of Dante’s Purgatory to write,

“Dante distinguishes two kinds of Wrath. The one is active and ferocious; it vents itself in sheer lust for inflicting pain and destruction—on other people, on itself, on anything and everyone it meets. The other is passive and sullen, the withdrawal into a black sulkiness which can find no joy in God or man or the universe.”

Here’s the insidious nature of wrath. Though I may be smart enough to know I’m not supposed to “go off”, I cannot so contain wrath that I am unable to keep from sulking when I don’t get what I want. It is the blatant refusal to, as C.S. Lewis might say it, enter into Joy, that exposes my wrath. In this light, wrath is punishing people with your own unhappiness.

Ultimately, it is Who the real object of my wrath which shows that I am, indeed a sinner. Who is the object of my wrath? Well, I think Val Kilmer as Doc Holiday in Tombstone gets it right when, talking with Wyatt about why Johnny Ringo does the things he does says,

Doc: “A man like Ringo has got a great big hole, right in the middle of Him. He can never kill enough, or steal enough, or inflict enough pain to ever fill it.”
Wyatt: “What does he need?”
Doc: “Revenge.”
Wyatt: “For what?”
Doc: “Bein’ born.”

That’s it. Ultimately one’s rage and wrath are directed at God who has allowed, permitted, decreed the circumstances which are so frustrating, confounding, disheartening, wounding, etc… to interrupt and dissemble my fragile peace in life. I retaliate in turn when I curse the day I was born.

Our scripture verse from the morning was from Romans 12 in which Paul writes,

Do not repay anyone evil for evil. Be careful to do what is right in the eyes of everybody. If it is possible, as far as it depends on you, live at peace with everyone. Do not take revenge, my friends, but leave room for God’s wrath, for it is written: “It is mine to avenge; I will repay,” says the Lord. On the contrary: “If your enemy is hungry, feed him; if he is thirsty, give him something to drink. In doing this, you will heap burning coals on his head.” Do not be overcome by evil, but overcome evil with good.

I’ve heard the “heaping coals” reference employed as way in which we could “kill others with kindness”. Let me first say, as a Christian, you’re not to be spitefully killing anyone. Secondly, the reference is to the turning away of a threat not an act of passive-aggression (yet another form of wrath and hence, evil). Paul, I believe, has in mind not merely the coals dropped from a city’s wall upon attackers, but also has in view the sanctifying coals of God’s holiness. Much like the cherubim in Isaiah 6, when the coals of our forbearance and goodness come into contact with the evil, evil is atoned for–not by us, mind you, but the Christian’s act of faith in Christ’s sufficiency, employs the capital which Christ secured. So, as Christians when we submit to God’s prerogative “to repay”, we overcome evil with good–even if we are killed for it.