Red and Dr. Pete arrived at the foot of Lookout Mountain after pushing the headwind for 15 miles or so. They turned toward the barn but they’d been discussing the possibility of climbing Lookout either via Ruby Falls or Nickajack (the time trial route during the Tour de Georgia). Rather than head back, Dr. Pete realized that if they turned back South they’d eventually

reconnect with the century route and be able to make the climb up Burkhalter Gap. No deliberation here; they did a U-ey and headed South on US11. After 30 minutes Red was beginning to wonder if they’d reach the route, but voila. Haibikingrockincyclists don’t lead you wrong. They made the connection and there was a wicked short, steep (18% -ish), climb that reminded them of what they were attempting.

After stopping at the SAG, Red went ahead — you know he’s slow climbing mountains — made the left hand turn onto Burkhalter Gap Road, and went, well, up. He made it to the top pretty well. The climb was long like Sauratown, but a little steeper. Pilot Mt is harder, he thinks.

Once on top of Lookout Mt, they had some rollers to contend with. Incidentally, it’s pretty

different than other mountain climbing in that these mountains are more like plateaus rather than ridge lines. They went up and down for a half dozen miles and made the descent down the east side of the mountain to St Elmo.

By the time they made it back to Carter Findley Stadium. The weather was great. Having knocked off about 18 miles was just the ticket.

And… they made it in time for the post-ride pizza feed, which incidentally was accompanied by suds! Have you ever heard such? Beer for 2400 cyclists? It makes me tear up just thinking about it.

Red was heard to say that the 3 State 3 Mountain was the best ride he’d done in a long time. 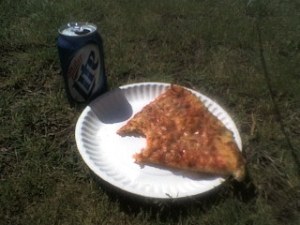 The early season challenge is not too taxing, and the support was amazing. Red just has to give a shout out to the local civil servants who saw the advantage to the community by investing in a ride like this. Granted 2400 cyclist and their families have an impact that probably warrants it, but nevertheless intersections were monitored by sheriff deputies and/or police officers and the SAGs were appropriately distanced, stocked, and staffed. It was very impressive and very appreciated! This is a ride to put on the calendar.