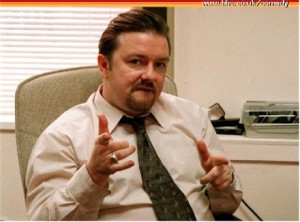 David Brent: A Modern Pilgrim
David Brent battles a bevy of enemies: corporate, boorish friends, redundancy, and a comedy-less world. Eventually, Brent leaves the city of destruction, Wernham and Hogg and sets out on his own to find redemption. His journey ends in being able to put Finchy in his place and meet the girl by now finally knows him. Such as Pilgrim, Brent is the modern English, epic hero.

This has got me thinking. Since The Office has been Americanized and set in Scranton, PA. Maybe we should consider Michael Scott as the great American frontier hero: Natty Bumpo? Daniel Boone? I’ll have to think on that.