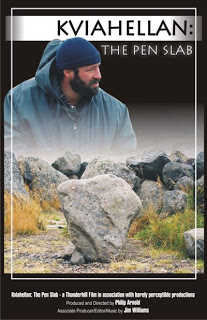 While at Appalachian I moved in some of the same circles as Steve Jeck. We went to church together, taught middle school in the same school system, and sang in the North State Chorale together. An all-conference shot and hammer thrower in college, Steve turned to Highland gaming after college where he excelled again.

Steve’s enthusiasm for strength training is infectious. And he’s not just

into strength for strength’s sake. He loves a challenge. In strength circles, Steve is known as Steve “Inver Stone” Jeck for a photo that appeared in a strength magazine back in the 90’s. The picture is of Steve lifting the clach cuid fir (manhood stone) in Inverness, Scotland (I think). Manhood stones were community tests or feats of strength which provided a right of passage for the challenger. The picture to the right made Steve famous in strength circles, and there’s a whole subculture devoted to stone lifting. Steve’s impact in the strength world is evidenced by the lifting of Atlas stones in the world’s strongest man competitions.

In thinking about stones and Steve, I found that a documentary was done about Steve’s attempt to lift Kviahellan, a 418 lb. stone slab located in Iceland. This documentary follows Steve as he prepares to not only lift Kviahellan, but to follow the old Icelandic custom of carrying the stone around Snorri Bjornsson’s two-hundred-year-old goat pen (about 50 meters), a feat few have ever accomplished. That’s awsome.